If you’re a regular reader of Data Center Knowledge, you probably already know that Amazon uses a subsidiary called Vadata as a proxy that contracts for Amazon Web Services’ data center shells. You probably also know that the biggest third-party developer of data center shells for AWS in Northern Virginia has been Corporate Office Property Trust. COPT is a publicly traded REIT whose core business is developing mission critical facilities and leasing them to U.S. government agencies and defense contractors.

According to the COPT Q1 2019 Supplemental, Vadata is its second-largest tenant by percentage of annual revenue (9.2%); its largest is the U.S. government. Even in second place, Vadata occupies about 3.1 million square feet of data center shells owned by COPT, with at least another million square feet under development. 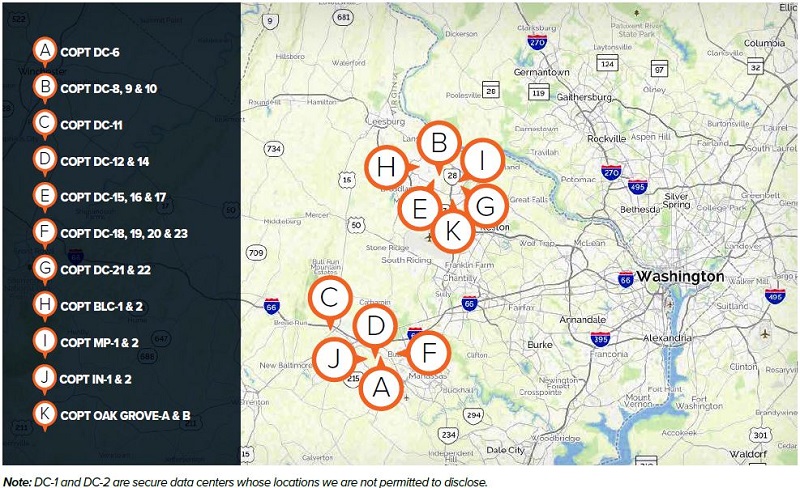 The map above covers 26 data center shells developed and/or operated by COPT as of April2019. It includes six data centers which have been contributed to a 50/50 joint venture, and five locations under development that total 1 million square feet. Notably, COPT owns and operates DC-6, a 233,000 square foot multitenant wholesale data center with 19.25MW of critical power.

Another Round of Powered Shells

COPT management guided to a 24-month time horizon to deliver the next seven AWS data center shells. Additionally, COPT is close to signing a programmatic JV partner to invest $200 million to $250 million in a portfolio of AWS data centers which COPT will contribute to the joint venture. This is similar to strategies which are either underway or have been announced by Digital Realty, Equinix, and QTS Realty.

The publicly traded data center REITs have reported a slowdown in hyperscale leasing in Northern Virginia during Q4 2018 and Q1 2019. Last year, the first three quarters generated most of the record 233MW of hyperscale bookings in Northern Virginia. Notably, data center shells built by third parties for Amazon’s public cloud service are not counted in the annual net-absorption figures analysts and real estate brokers report.

One reading of the ongoing COPT building program in Northern Virginia would be that the glass is half-full — in the sense that demand for AWS cloud services by enterprise and government customers appears to have no end in sight. This consistent demand could bode well for third-party data center operators who are building massive campuses to serve the needs of the other hyperscale public clouds, SaaS, social media, e-commerce and content giants in and around Data Center Alley.

However, the other side of the coin is that the price and availability of land suitable for data center development in Northern Virginia continues to be impacted by the relentless growth of Amazon Web Services.