“CAPEX rules everything around me…”

That fascination turned into an early sense that CAPEX was a key tell for cloud computing success, which then spiraled into something of an obsession for over a decade. It also contributed to a low tolerance for putative cloud vendors whose rhetoric exceeded their spending.

This post updates 2019 CAPEX spending by the public clouds (here are updates for 2016, 2017, 2018 as well as earlier installments). The role of CAPEX in the cloud contest is well understood at this point, perhaps even a little boring, but I do have some ideas for where to point the CAPEX telescope this year for perhaps some new insights.

The usual caveats apply to this discussion. The reported numbers are the companies’ total CAPEX spend, not just cloud infrastructure, so includes  things like land, office buildings, warehouses, manufacturing tooling, self-driving cars, all the cool super-cooling equipment in the background of the photos accompanying stories on quantum computing, and the ever slimmer prospect of a Google space elevator. The numbers include capital leases for both Amazon and Microsoft, as well as build-to-suit leases for Amazon (these are debt instruments used to finance specific CAPEX expenditures, namely servers and buildings). 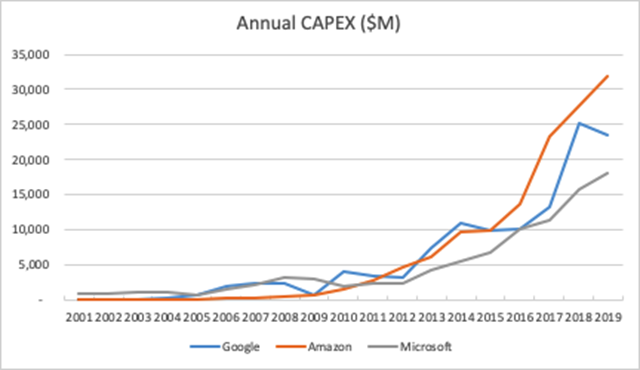 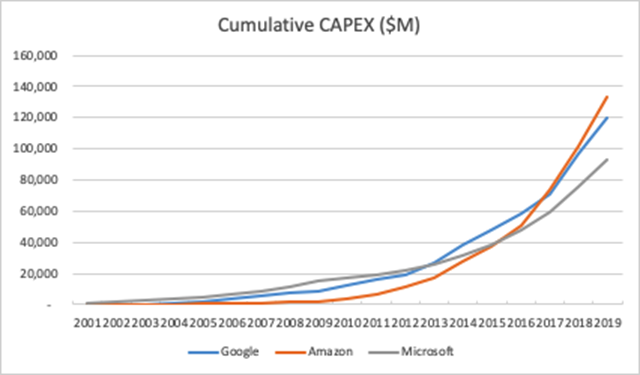 The three companies cumulative CAPEX spend since 2000 is over $347 billion, with $142 billion of that occurring in the last two years. Who says businesses don’t invest any more? 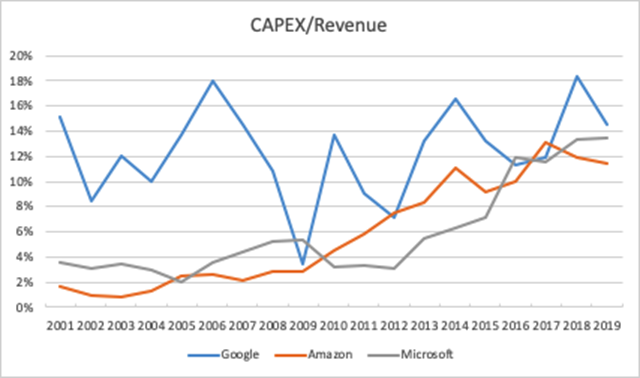 As a percentage of revenue, the companies remain remarkably close despite having very different revenue profiles. Google continues to oscillate on a three to four year CAPEX cycle, with a peak in 2018.

This past year has also seen the clouds vs. clowns divergence foretold by CAPEX spending really play out. Both IBM and Oracle have dropped out of the public cloud race, with IBM pivoting to their legacy and consulting-centric interpretation of “hybrid cloud” (2019 CAPEX spending down 36%), and Oracle pursuing a niche infrastructure strategy while focusing on applications and milking the database franchise for as long as possible.

Here is the previous standard disclaimer for Amazon, which I will soon update with “satellite constellation”, as they desperately look for ever more expensive ways to mop up free cash flow and not report a profit:

The top line Amazon CAPEX number is pretty useless at this point for insights about AWS infrastructure spending. There are just so many other things consuming CAPEX – distribution centers, warehouse robots, grocery stores, cargo jets, office buildings, biospheres, a hyper-segmented line of talking alarm clocks, etc. – that AWS infrastructure is almost certainly a minority of the total company CAPEX. 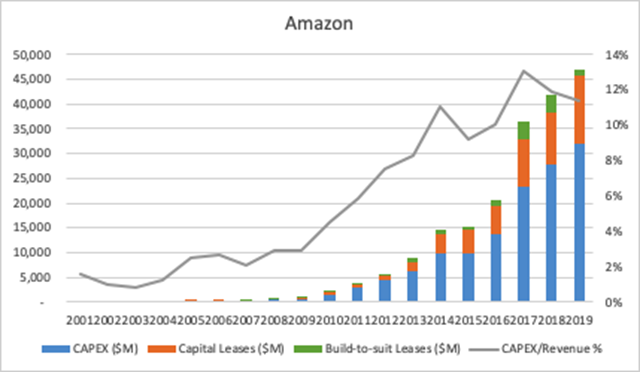 Amazon’s CAPEX growth decelerated this year, but still was larger in 2019 than IBM’s CAPEX cumulative spending under the outgoing CEO’s (disastrous) eight year tenure. Build-to-Suit leases actually declined (I don’t know if this is data center buildings and warehouses or just warehouses). Capital leases remain the best proxy for AWS infrastructure spending, though they don’t correlate well enough with AWS revenues to be worth a chart. Amazon’s bean counters did announce they were going to extend the useful life of their servers from three years to four years, which should bolster their accounting results, but true CAPEX obsessives disdain depreciation and remain singularly focused on the vast (and gross) quantities of concrete, glass, and silicon being woven into clouds. 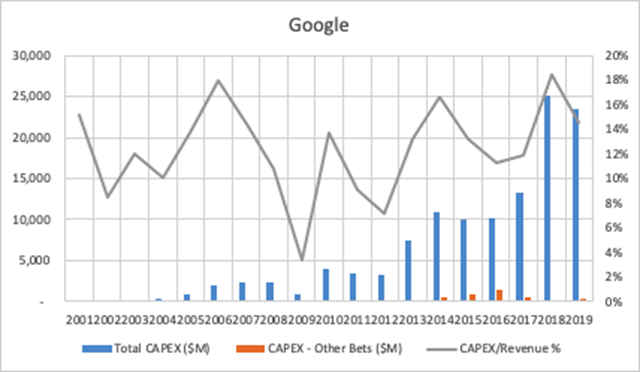 Google CAPEX actually declined in 2019 but this is not the first time that has happened. Their three to four year CAPEX cycle really pops when you look at it as a percentage of revenue. Google did disclose their Cloud revenues (GCP and GDocs) for the first time, but these numbers don’t drive their CAPEX spending, which remains dominated by search, ads and YouTube. Unlike the other two clouds, Google’s cloud business is a tail that does not wag the infrastructure dog.

Google did disclose that their real estate acquisitions in 2019 pushed the proportion of CAPEX dedicated to technical infrastructure down to about 60% from a more typical 70%. This means Google’s decline in infrastructure CAPEX was even more pronounced than shows up in the chart. Mitigating the decline, Google is also now reporting operating leases for data center real estate, which I have not included in the absence of a longer time series.

CAPEX dedicated to Other Bets climbed this year by $100M but is becoming ever more of a rounding error in terms of the overall spend. I expect Other Bets to disappear as an reported item in the next year or two, as the Alphabet exercise in corporate governance avoidance gets unwound. 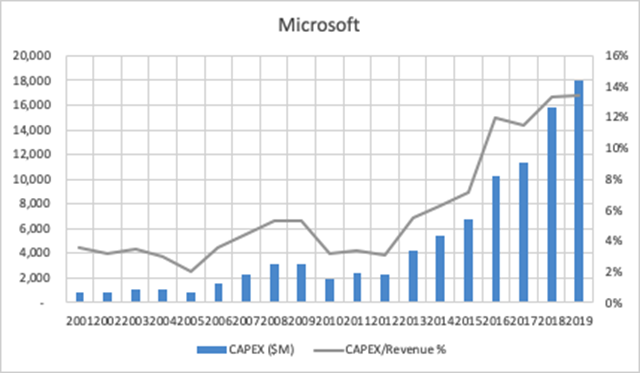 Microsoft’s reported CAPEX continues to have the least noise in it, although Microsoft is in the midst of a huge campus building campaign so their numbers may be less reflective of infrastructure CAPEX than in the past. Some day I’ll type in all the revenue numbers for their Commercial Cloud revenues and look for a correlation with CAPEX, but given both are up and to the right, I don’t expect to learn much.

Newmark Knight Frank Releases H2 2019 U.S. Data Center Report with an Eye on 2020 and Beyond